Missions Team: Looking for God in the Dark 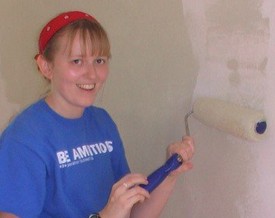 Monday arose with a day of work planned. We were to paint the pastor’s home as they were preparing to tear down the old house standing in the way of the construction of the church. The paint was bought and the team, using rollers, brushes, paint, elbow grease, and Christian camp songs began the work. Little by little the rough walls began to take on their new look. Here you can see Kelsey putting on the first coat. (Unfortunately for us, the paint we used on the first day was totally incorrect, leaving us to repaint what we had done over again, but that is for another post.)

The highlight of the day actually came from a darkened room. An off night of ministry for us, we gathered with the congregation for prayer in their traditional prayer service. When we arrived, however, we were a bit confused. The lights in the church were off. We had thought perhaps that service was canceled. Looking for direction from those in the pastor’s home, we were told that it was the custom of the congregation to pray in this manner. So we entered in to join the many who were already seeking God.

What resulted was impacting. Mike, my brother, mentioned his impression later in this way: When I felt that I had prayed enough, I looked up, expecting perhaps that the congregation would have finished as well, when I realized that they hadn’t, I continued in my prayers the darkness helping me to maintain my focus and the time allowing me to connect with God in a way that our busy distracted lives don’t often allow.

What an irony, that in our week of finding (remember from our last post that our theme was Luke 15) we could actually encounter God in a new way by turning off the lights! We learned in that evening to set aside our i-pods, our power point presentations, and movie clip sermon illustrations for awhile in order to allow God to speak to us in a totally unscripted, unorchestrated way. We also learned that missions trips are not only about giving, but receiving as well. So are you interested in finding God? Try turning off the distractions for a moment and letting Him speak.