Can the Yucatán be a Force in Missions?

Traditionally, missions has been the realm of those of White, Anglo-Saxon descent. The ranks of missionary heroes are full of names like Hudson Taylor or Jim Elliot. However, Latino, Chinese, or African names remain remarkably absent from such lists, even after decades of work within such nations. 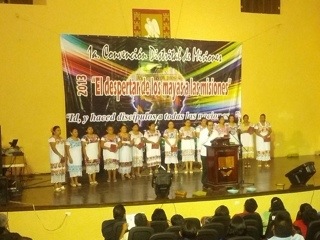 We understand these tendencies. Those mentioned were ones who opened up new territories to the Gospel. But, now that those areas have been opened, what of those who have been reached? Do they have a responsibility to share in the burden of World Evangelism?

Jesus seemed to think so. His missions strategy was the original Pay it Forward plan. “Freely you have received, freely give” (Mat. 10:8). He expected his fledgling disciples to pass on what they had learned from Him, and he commissioned them to engage in that worldwide effort from the get-go (Acts1:8).

Still, while some have answered the call, actually reaching the country of their calling is a tremendous challenge. The reality here in Mexico is that, although missionaries are responding, the church as a whole remains largely non-committal in regards to missionary responsibility. This is dangerous, especially as unreached areas close to those fitting the traditional missionary profile. 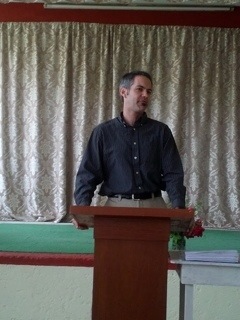 This month, were working toward a solution. I had the chance to preach in our sectional pastor’s meeting, and I challenged our leaders to take steps to increase missions consciousness among their churches. Also, this week, we are in the middle of our District Missions Convention, “The Awakening of the Mayas to Missions.”

What is the goal of these efforts? It’s to encourage our churches to feel the responsibility of missions and to sense the empowerment that Christ has given to all his disciples regardless of nationality.

We believe that the Yucatán can be a force in missions. Pray with us to that end, and, maybe someday, we’ll read of a Norma Uitzil, or a Lidia Pompeyo among those lists of missions heroes.

Blessings on you as you stand with us in prayer!

As we move into the second half of our term, we’ve seen God moving us to undertake a three-fold mission. In this prayer update, we present this vision to you so that you might agree with us for it’s completion. 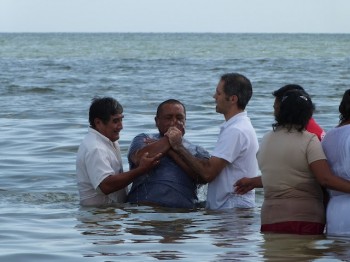 Since our missionary career began in 2004, our desire has been to reach others with the gospel. We’ve engaged that mission through social outreach, campaigns, and one-on-one evangelistic efforts. This term, we’ve had the opportunity to reach out to the indigenous Maya people in their own language. With your help, we can equip and send more teams to plant churches among them.

Remove obstacles to the gospel

I’ll never forget the sadness I felt as I watched one man walk away from the church. He was an addict, and that particular church had nothing to offer him to meet his needs. I prayed in that moment that I’d never have to witness an event like that again.

This term, we’ve seen God answering that prayer. We’ve been able to come alongside two drug and alcohol rehabilitation centers to introduce them to Teen Challenge resources. We are working to help them to shape and expand their programs. Our desire is to see these ministries become regional resources for people struggling with addictions.

Raise up others to do the same 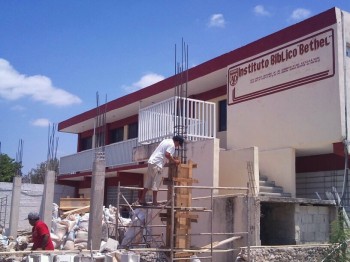 At “Instituto Bíblico Bethel” we’re training up the next generation of pastors and missionaries. Regularly, we’re teaching such subjects as evangelism, apologetics, church planting, and missions, sharing our God-given vision. Right now, we’re halfway through a project to expand their facilities to better serve these ministers in formation. We believe that with your help we can reach our goal to finish this building in this term. 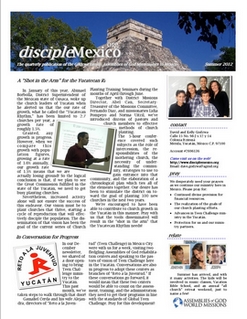 Want to learn about the Yucateco Rhythm and why it needs to pick up the pace? Hit the link here or click on the picture to find out! While you’re there, don’t miss the rest of our latest quarterly update from the field! 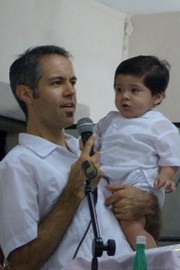 No, not the missionary, the BABY!

In case you didn’t know, “¡Que lindo!” is an expression that means, “How cute!” and indeed this little guy was, but he is also quite a story.

Gaelyn Vladimir was born nearly a year ago with serious problems. In a difficult forceps delivery, his head and arm were damaged. The doctors expressed concern that he’d ever develop into a normal baby. Desparate, his parents called pastor Abel Can to pray, and that has made all the difference.

Now, you’d never know he’d been through such a trial. He’s a bright, inquisitive one year-old, who is a joy to be around. His parents, who’d strayed away from the church, are now active members, and, two weeks ago, they walked forward to dedicate themselves to raise Gaelyn in a Christian home.

For me, this was a Yucatán first. I’d never been asked to dedicate a baby before, but, as you can see, I had no need to be nervous, nobody was paying attention to the preacher! 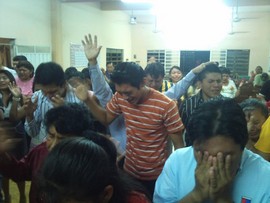 Do your prayers matter? To Moisés they do! On the 25th of January, I asked the readers of discipleMexico.org and specific prayer partners to pray for the event, “Reconciling us with the Holy Spirit,” held at the church Eben-ezer, here in Mérida. Several responded saying that they would pray, and for Moisés it’s made all of the difference!